I did it ya’ll. I did something I’ve been wanting to do for a very long time. I threw a successful surprise party! It was so much fun and I can’t wait to do another one in the future again sometime. For the back story: Around Christmas 2012, my mom casually mentioned in a conversation that she had never had a surprise party before. What?? That is just unacceptable. So immediately, my brain started formulating this crazy idea to throw her the surprise party of her LIFE. Granted, her birthday was still 7 months away, but I knew for a party of this caliber there was no procrastinating to be had.

If you don’t know, my family has moved around countless times over the years. I’ve moved 8 times, and my mom has moved 13 times since marrying my dad. So needless to say, she’s got friends from all over. It was my hope that I could invite people from all over the south east. I knew it was a long shot, but I just HAD to try. And try I did!

After months of planning, careful, secretive, deliberation, and a few white lies here and there, July 27th finally came and my family got to surprise my mom for her birthday. It was beautiful. Absolutely couldn’t have gone any better. She assures me she had NO clue, and I think you can tell from the pictures that she wasn’t lying. 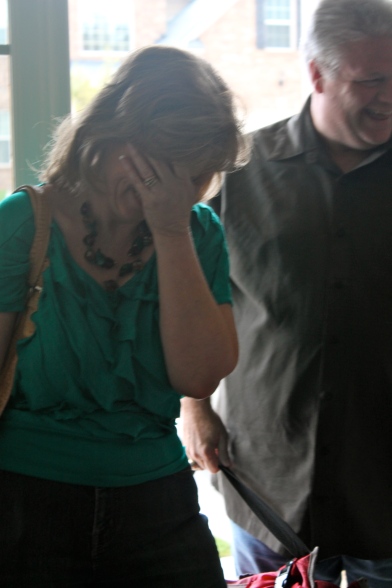 I love those pictures. Reliving that moment is priceless.

After the initial surprise, it was time to eat and fellowship together. It was so fun seeing my mom with all of the friends that she has been the closest to for the longest time. Before the bulk of the pictures, I apologize some of them are blurry. I’m still getting used to my camera in indoor settings! 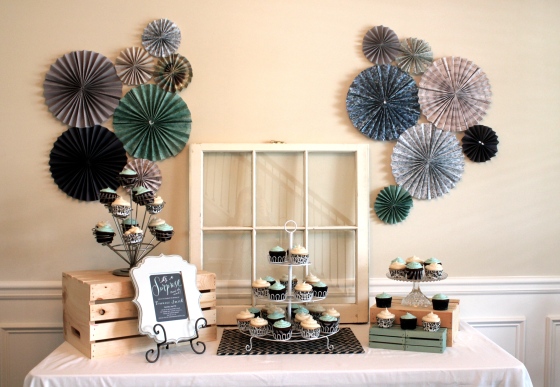 I’ve had a lot of people ask me how I made those pinwheels. Easiest thing on the planet, but also the most time consuming. Three pieces of scrapbook paper, folded accordion style, then folded in half, then hot glue or staple together. That’s it! Just be prepared to do it for a few hours, depending on how many you’re trying to make.

Thank you to Carol Ann for providing the white chocolate cupcakes, the white cupcake stand, and some mason jars!

We decided to make our garage into the food serving station. Great idea in theory, but not so great in execution. You wouldn’t know it from the photos, but oh my word, the flies. I sincerely apologize to all the guests who had to keep swatting flies away from their food. I’ll spare you the maggot story that unfolded as a result of our weekend. Just make a note to yourself, DO NOT ACCIDENTALLY LEAVE A BAG OF TRASH IN YOUR GARAGE FOR THREE DAYS. Trust me on this one. (Also, I’m sorry to my brother Jonathan for the panicky phone call). 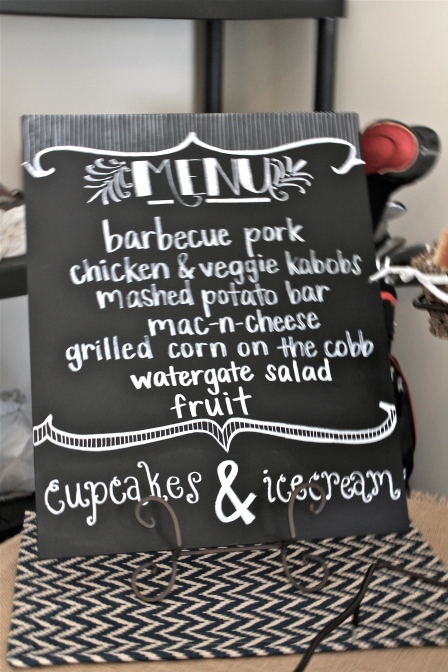 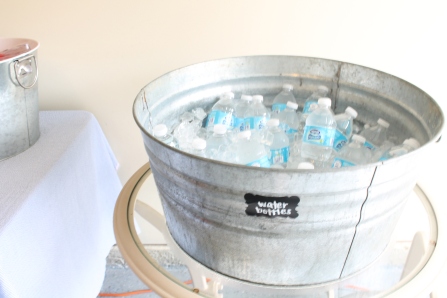 We all sat and visited for HOURS. It was great. And of course we were entertained by my niece Rilynn. She could easily have her own show. 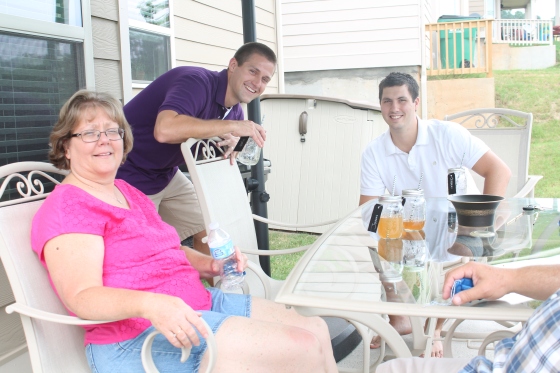 A special thanks to this lovely lady in pink right here. My mother in law, Carla, continued cooking the kabobs while everyone was arriving and visiting, and THEN washed the majority of the dishes and pots and pans as they were becoming available. Don’t know what I would have done without her! 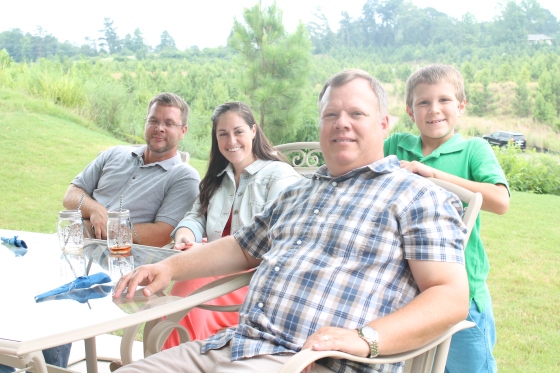 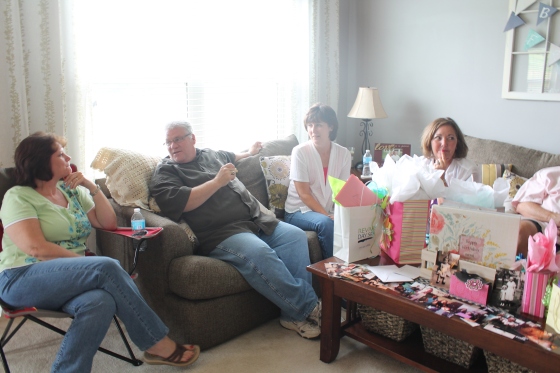 For a little entertainment for everyone, as well as a sure-fire to document everyone who came to the party, we set up a photo booth! Originally we were hoping to build a farmhouse table out of this wood before the party, but there seriously was no time to get that done. So instead, we made it into the most perfect backdrop! I was SO pleased with how it turned out! 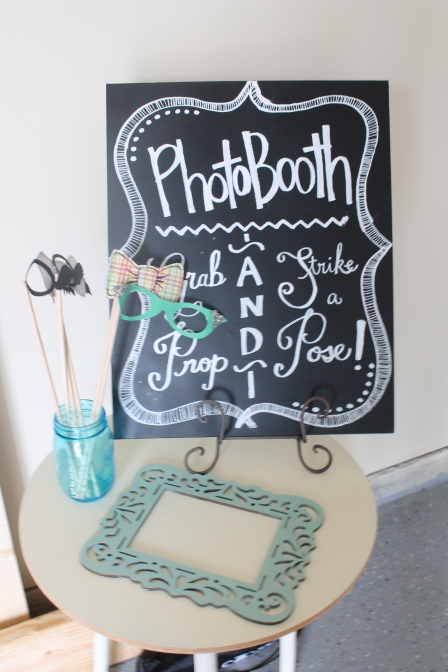 Also, special thanks to my friend Lindsey for letting me borrow her photo booth props!

I did not expect people to bring gifts, but they went above and beyond! And my Aunt Linda brought a whole bunch of old pictures of my mom growing up. So fun!

My mom’s friends also went above and beyond because they all wrote a letter to her that I put together in a scrapbook as a keepsake from the party. So that after the party, I will add the pictures we took that day to the scrapbook to make it an all-inclusive memory book! 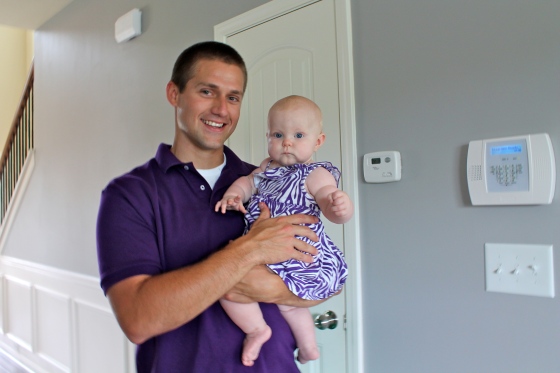 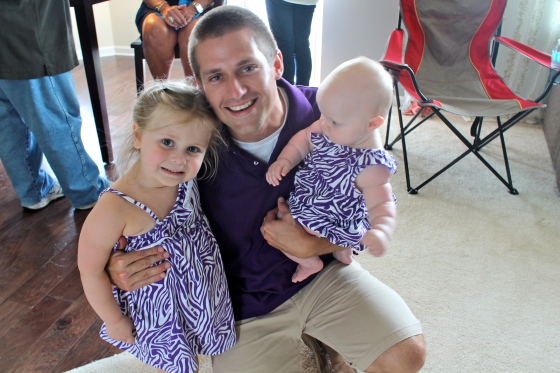 My hubby with his two nieces!

My best friend Chelsea is like a second daughter to my mom, so of course she had to come!

Apparently, my parents were in a singing group when they were newlyweds! Haha. Jane and Rick, two other members of the matchy matchy group brought this poster to give to my mom. My parents are in the bottom left corner. 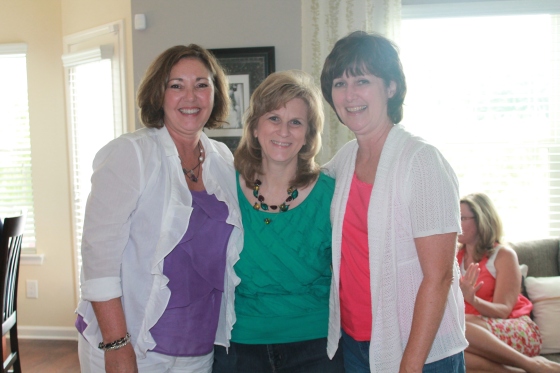 Now, for the rest of the photo booth FUN! 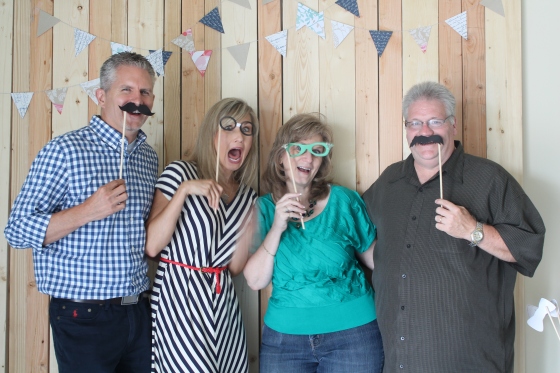 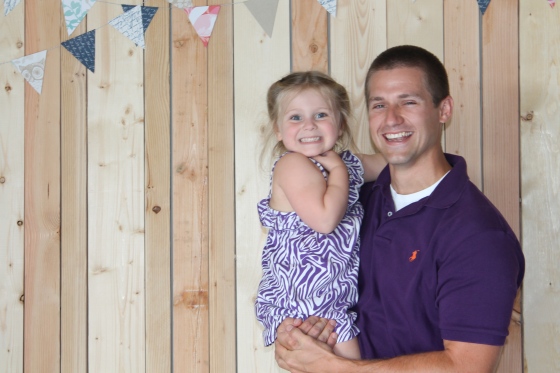 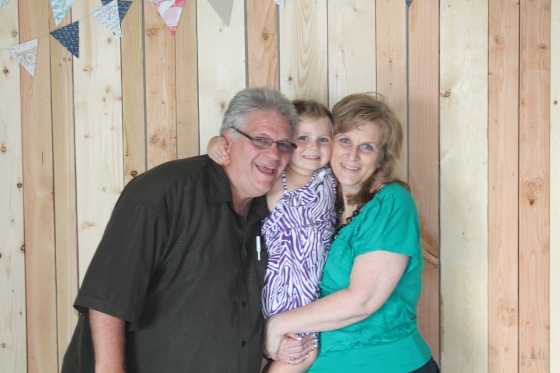 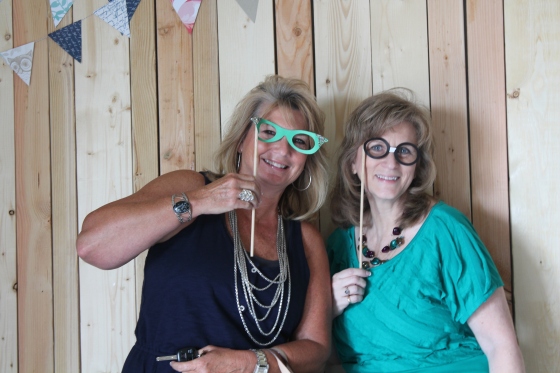 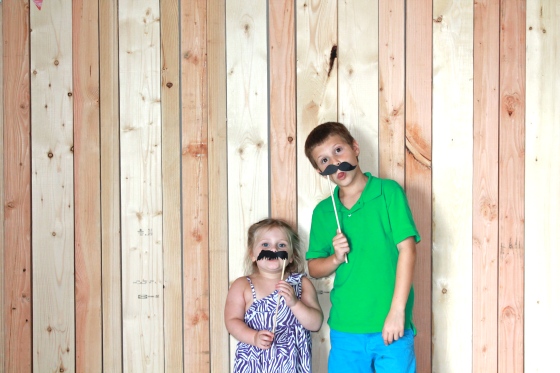 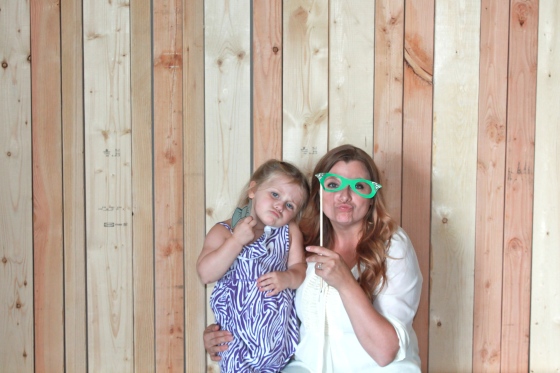 Love my mom, love our family, and love all the people who had a part in this to make it happen. Thank you SO much!

(Also, major shout out to my friend, Loren, who let me borrow the majority of the decor. The water bucket, the table cloths, the blue mason jars, the silver cupcake stand, the various trays and serving dishes, crock pot, and probably more. You’re awesome Loren! Thank you again!!)